Auto-RollerNewsUncategorizedThe History and Evolution of the Cricket Roller
March 31, 2022 By Autoroller

The History and Evolution of the Cricket Roller 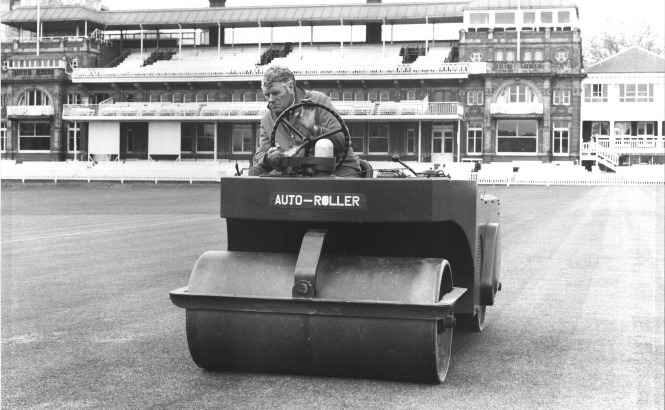 The cricket roller is an integral part of every match, ensuring an even and fair surface as well as prolonging the life of the pitch. But where did the story start and how has the cricket roller evolved over time? Let’s find out.

Although the exact date upon which the first game of cricket was played is not known, the first written reference to “Creckett” can be found in the records of a legal case in 1598. In the case, John Derrick, a coroner, states that he played the game of Creckett (on a piece of land under legal dispute) when he was a boy, in around 1550. Given that John Derrick was unlikely to have been the first ever cricket player, it is logical to assume the game started well before that date. No reference is made in the legal case to the state of the pitch or the use of a roller, however.

It is probable that early games of cricket would be played in forest clearings, or animal grazing land, including village greens. The playing surface would have been agricultural rather than ornate. However, in the 18th century, a relatively new feature appeared on the landscape. Lawns. An ornate area of closely cropped grass, adjacent to the manor house, became highly prized. The aesthetic demanded manicured grass on a smooth surface. Creating and maintaining a prized lawn was a hugely labour intensive and skilled task. Grazing animals, scythes, sickles, and shears were all used to maintain the grass, but even the most skilled labourer left swirls and other unwanted imperfections. The desire for perfect grass led to the rise of the lawn mower, the need for a flat surface led to the roller.

As lawns got more ornate and indeed flatter, it was only a matter of time before similar focus was given to the world of sport. According to Cricket Grounds: The Evolution, Maintenance and Construction of Natural Turf Cricket Tables and Outfields, by Roger D. C. Evans:

“Hand rollers gradually came into use on cricket grounds during the early years of the 19th century. Originally, rollers were of natural stone, laboriously rounded into shape, but later wooden (particularly elm) and of course cast-iron rollers were in widespread use. Early rollers for cricket tables were all hand pulled.”

It would be almost 100 years before mechanical rollers would arrive at Lords, but how did they get there?

The industrial revolution played a part in solving the ‘problem’ that was blemish free lawns. On August 31st, 1830, Edwin Beard Budding was granted a British patent for the first mechanical lawn mower. Budding’s mower was designed primarily to cut the lawn of larger gardens and importantly for us, “sports grounds”. His inspiration came from the cutting cylinder used by cloth mills, to trim the irregular nap off woollen cloth. His mechanical lawn mower was used on the hallowed turfs of Wimbledon, Wembley, Twickenham and indeed Lord’s. His home town has celebrated his achievement with a Blue Plaque and an early example of his invention can be seen at the Stroud Museum.

In 1835 an engineer, Thomas Green, formed a company in Leeds making, amongst other things, lawn mowers and rollers. Holding a royal warrant, they had the reputation of making “British lawns the envy of the world”. The classic T Green and Son counterweight cast iron garden roller can still be found for sale today and is highly collectable. It is testament to the quality of both design and manufacture that these hand rollers are still in circulation.

Automation was heading the way of the roller too. In 1866, Aveling & Porter produced an experimental machine, fitting 3-foot-wide rollers to the rear of a 12-horsepower traction engine. This prototype was described by local newspapers as ‘the world’s first steamroller’ and caused significant public spectacle. The first company to combine a steam engine traction unit with a roller, they went on to have huge success, exporting to Europe, India, and the USA. Whilst not designed primarily, or indeed in any way for the game of Cricket, mechanical rollers were here to stay.

Whilst Lord’s rightfully has the reputation of being the Mecca of cricket, the standard of its pitch has not always lived up to that accolade. Overuse and primitive ground care produced some terrible pitches. In 1864 the team from Sussex refused to play because conditions were so dangerous. Despite the MCC returfing the entire grounds, conditions were still poor. Lord Harris, the Governor of Bombay and a keen amateur cricketer was quoted as saying he expected “three shooters every eight balls” when playing at Lord’s. The uneven pitch was still a problem and between 1869 and 1870, only two first class games made it to the third day.

But tragedy was to strike in 1870, when George Summers, a visiting batsman from Nottinghamshire, was struck on the cheekbone by a ball that reared up after striking a pebble in the pitch. WG Grace, then a 22-year-old medical student, gave Summers what assistance he could. Summers, although conscious, was deemed unfit to continue. There was no head protection in those days, although following the delivery, Richard Daft, Nottinghamshire’s captain, came to the crease with a towel wrapped around his head and chin, hoping for some protection. Following the match, George Summers returned to Nottingham, where he collapsed and died from the injury three days later.

Although the heavy roller had been patented a few years previously, it’s use and the focus on properly maintained pitches seems not to have been a priority at the time. The unfortunate death of George Summers possibly acted as a catalyst, with increased use of the heavy roller being partly responsible for improving pitches and longer lasting games.

The introduction of the heavy roller came with a problem, how do you pull it? Whilst horse powered farm machinery had been in use for many years, their use was problematic in cricket, given the potential damage horse hoof prints might make to the pitch. Step forward the horse boot! These boots had flat soles, and were designed not only to avoid hoof prints, but also to reduce other imperfections in the pitch! A particularly well regarded make, the “Pattisson” horse boot, even advertised an alleged testimony (“one of hundreds”) from a certain “Dr W.G.Grace” who stated “They are the best boots I have ever seen!”

Horse pulled rollers, such as “Howard’s new ‘Salvahorse’ roller” came in widths from 5 to 7 feet, and as well as attesting to be ‘almost unbreakable’, claimed that their single horse system could do the same work as their competitor’s two horse rollers.

Following the first world war, G Grist formed the Auto-Mower Company to help fulfil the need for better quality automated ground care products. The very first ‘Auto-Rollers’ used water cooled JA Prestwich engines, mounted on castings supplied by Dennings of Chard. Rollers were designed and manufactured for a number of applications, including hockey, cricket and even for rolling grass airstrips.

Shortly after the second world war, the business split in two, with ‘mowers’ being sold to Ransome, Sims and Jefferies and ‘rollers’ including the Auto-Roller being taken over by TH White in 1968. Engine technology had evolved with Briggs and Stratton petrol engines and Lister diesel units being used.

In 1995, Autoguide Equipment purchased the Auto-Roller Business from TH White. The focus was to continue the evolution of the Auto-Roller, whilst ensuring that previous generations of rollers could be maintained and indeed upgraded. Engine technologies have dramatically improved, and indeed Auto-Rollers as old as 1948 can be fitted with a repower kit, effectively a ‘heart transplant’ to give them a new lease of life.

Today’s Auto-Rollers combine modern technology with the heritage that has made them famous. Power steering, electric start, and fully contained hydrostatic transmission running on biodegradable oil, are just some of the standard features of the range.

Cricket and ground care has come a long way in the last few hundred years. Whilst the game will change and adapt to meet the needs of the modern world, some things will remain constant; the need for a great pitch. If Autoguide can help with your roller requirements, please get in touch, we would love to hear from you.